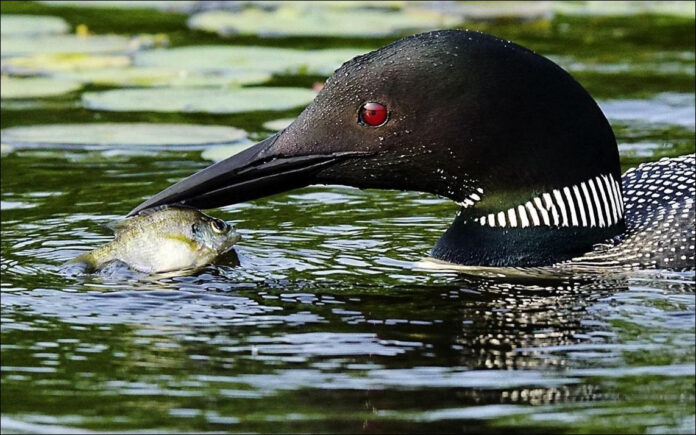 West Nile virus appears to be the culprit behind a recent increase in the number of dead loons showing up around northeastern Minnesota lakes, the Department of Natural Resources reported Thursday, July 18.

The Veterinary Diagnostic Laboratory at the University of Minnesota confirmed West Nile virus as the cause of death in two of three dead loons from lakes in northeast Minnesota earlier this month — including Arrowhead Lake near Britt, Bass Lake near Biwabik and Loon and Horseshoe lakes east of Eveleth.

“We’re getting a lot more reports of dead loons than we are used to getting, but most have been too decomposed to determine the cause of death,’’ said Gaea Crozier, DNR non-game wildlife specialist.

The deadly virus, spread by mosquitoes, was first confirmed in Minnesota in 2002 and was documented as a cause of loon mortality in Minnesota as early as 2005. The virus also has been confirmed to kill crows, ravens and jays in Minnesota and is being studied as a possible culprit for recent declines in ruffed grouse numbers. It has also been found in moose, and horses are especially vulnerable.

It is not uncommon for people, animals and birds to be exposed to the virus in Minnesota, land of many mosquitoes. Most people, birds and animals successfully fight off the virus and develop antibodies against future infection. But some birds, like loons, crows and jays, are especially susceptible to the infection.

“With animals and birds, as with people, it’s usually an individual that’s already health-compromised in some way that ends up succumbing to West Nile virus,’’ Crozier said.

So far the number of loons found is not cause for alarm, the DNR said. A long-term study shows the state’s loon population has been stable over recent decades, although specific lakes where multiple loons die from West Nile may see fewer of the state birds for several years.

“Minnesotans love our loons, and it’s concerning for people to find them dead. When we start seeing multiple birds dying on a single lake, we want to know about it so we can start tracking the information and determine when further testing is warranted,” Crozier said.

While there’s no treatment to stop West Nile virus from killing birds, the DNR wants to rule out other preventable causes of mortality to “make sure it’s not something that’s contagious. People want to know that it’s not something bad in the water,’’ Crozier said.

Arno Wuenschmann, professor of pathology in the University of Minnesota College of Veterinary medicine who has been tracking West Nile virus in Minnesota for 15 years, said the loon deaths means the virus is active this summer. That means people should take precautions for themselves, like avoiding peak mosquito times outdoors and using repellent if outside — and also remember to vaccinate their horses. In 2015, there were 2,175 human cases of West Nile virus nationwide with nine confirmed cases in Minnesota, according to the Minnesota Department of Health.

Lake homeowners and other lake users who observe two or more dead loons on a single lake with no obvious injury or cause of death are asked to email the nearest DNR non-game wildlife staff:

Individual bird carcasses can be disposed of by burial or in the trash. There is no evidence people can contract the virus from infected birds, but gloves or a plastic bag are recommended when handling any dead animal.