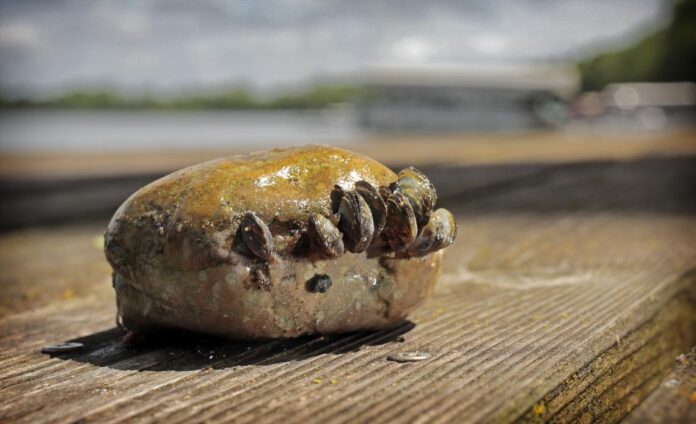 For years, zebra mussels have been slowly spreading to lakes in Minnesota, including Lake Maud in Becker County, where this photo was taken. David Samson / The Forum

PELICAN LAKE, Minn. — When zebra mussels showed up in Pelican Lake in Otter Tail County, Minn., about a decade ago, their arrival sparked alarm.

The invasive species, which at its largest grows to about the size of a sunflower seed shell, has a sharp-edged shell that attaches to hard surfaces, both natural and man-made, like boat lifts and dock stands.

When the aquatic invader reached Pelican Lake, stories soon spread about children suffering cuts on their bare feet and, because the mussels are extremely good at filtering algae from the water, anglers were concerned about the impacts on the lake’s food chain.

Ten years on, Pelican Lake still has zebra mussels, but the intensity of concern has moderated, according to Emily Meyers, whose family has operated Fair Hills Resort on Pelican Lake since 1926.

Emily Meyers, whose family has operated Fair Hills resort on Pelican Lake in Otter Tail County in Minnesota since the 1920s, talks about how the presence of zebra mussels in the lake has affected the resort and the lake’s ecosystem. David Samson / The Forum

“The fears we had 10 years ago haven’t been realized yet,” Meyers said.

“We’re hoping it doesn’t affect the lake’s ecosystem as badly as maybe we were concerned that it would, but I guess it’s one of those situations where time will tell,” added Meyers, who made it clear the presence of zebra mussels has been far from benign.

She said people can cut their feet on the shells, so the resort regularly rakes the beach area in an effort to minimize the issue. Also, at the end of summer they have to scrape shells from the bottoms of boats and structures that have sat in the water.

Because of their filtering ability, zebra mussels make lake water clearer, which can encourage plant growth. For that reason, Meyers said many locals suspect zebra mussels are behind an increase in weed growth in recent years.

“We are doing beach cleanup like you wouldn’t believe,” she said. “We don’t know for sure if that’s from zebra mussels or not, but this is probably the most labor-intensive part of our business now — cleaning up all the weeds that wash in.”

Some residents of Pelican Lake in Otter Tail County in Minnesota believe the presence of zebra mussels has contributed to more weeds washing up on beaches. David Samson / The Forum

When it comes to fishing, Meyers said the consensus seems to be fish size has increased since the arrival of zebra mussels.

She said officials associated with a recent walleye tournament shared that the winning catches were among the biggest fish ever pulled out of the lake.

On the other hand, a recent University of Minnesota study found that when lakes were infested with two aquatic invasive species — zebra mussels and spiny waterflea — young walleye didn’t grow as large or as quickly as they did before the lakes were infested.

The study by the Aquatic Invasive Species Research Center involved lead researcher Gretchen Hansen, an assistant professor at the university, who looked at data the Minnesota Department of Natural Resources had collected from fish in nine large Minnesota lakes for 35 years.

Hansen found that walleye in lakes infested with zebra mussels or spiny waterflea were 12% to 14% smaller after their first summer than before the lakes were infested.

Minnesota spent about $9.6 million in fiscal year 2019 fighting all types of invasive species and about 44% of that total went toward inspections and other rule enforcement efforts.

Agencies that enforce such rules say stopping the spread of zebra mussels requires the help of everyone and much can be achieved if every boater practices the following steps:

Zebra mussels react differently in different bodies of water, according to Ranweiler, who said mussel populations may grow dramatically in one lake, but may take years to become established in another.

In any case, he said, water shoes are a must for lakes with zebra mussels.

While zebra mussels are a proven nuisance, they are not on the minds of people looking to purchase lakeshore property the way they once were, according to Lief Rogstad, owner and broker at Action Realty in Detroit Lakes, Minnesota.

“We’re not getting asked as much about zebra mussels as we did five years ago, four years ago,” Rogstad said.

This map provided by the Minnesota Department of Natural Resources gives an idea of the number of lakes infested with zebra mussels as of 2010. Special to The Forum.

This Minnesota Department of Natural Resources map shows the approximate number of lakes infested with zebra mussels as of 2019. Special to The Forum.

While many of the better-known lakes in west-central Minnesota have zebra mussels, Rogstad said many lakes still do not, particularly those not part of a river system, like the Pelican River, which provides a watery highway for mussels to move from one lake to another.

Rogstad recalled a recent fishing trip on Big Detroit Lake, during which someone snagged a sunken branch.

“That branch was crazy heavy, and it was completely covered with zebra mussels,” he said.

In the United States and Canada, facility managers use pesticides to kill zebra mussels in closed systems, such as water cooling systems of power plants, but many pesticides used in closed systems are not allowed for use in open water, according to Ranweiler, who said that in natural waters, such as lakes or rivers, attempts to control zebra mussels are uncommon and considered experimental.

But the fact that so few Minnesota lakes are infested three decades after zebra mussels came into the state is remarkable, according to state officials, who point out that the state has 866,000 registered boats and more than 3,600 public boat landings, all of which serve as possible doorways to spread invasive species, according to reporting done by the Duluth News Tribune.

Zebra mussels have been slowly spreading to lakes in Minnesota, including Lake Maud in Becker County where this photo was taken. Department of Natural Resources officials say efforts to slow the spread of the invasive species have been successful, to some degree, as less than 4% of lakes in the state have been affected so far. David Samson / The Forum

In North Dakota, zebra mussels were found in the Red River about 10 years ago and last year they were confirmed in Lake Ashtabula.

Today, zebra mussels are believed to be present in the Sheyenne River from Lake Ashtabula to the Red River, according to Ben Holen, aquaticnuisance species coordinator with the North Dakota Game and Fish Department.

To keep zebra mussels from spreading to new bodies of water, Holen said the state conducts roving inspections at boat ramps in areas like Devils Lake, Lake Sakakawea and the Missouri River system.

In North Dakota such inspections are voluntary on the part of boat owners, but Holen described compliance as extraordinary.

“It’s, like, 99% of people this year have been saying, ‘I’d love for you to inspect my watercraft,”’ Holen said, adding that in many cases inspectors find boaters have been conscientious about draining residual water.

For Fair Hills Resort on Pelican Lake, Meyers said zebra mussels were probably their No. 1 worry in recent years.

That is until the COVID-19 pandemic happened.

Now, she said, their occupancy rate is about 9% of what it usually is in the summer. “We’ve never seen anything like this before,” Meyers said, adding that historically their customer base has included regulars happy to drive great distances to spend time on Pelican Lake each summer.

With the coronavirus keeping many of those traditional guests closer to home, Meyers said they’ve had to change things up.

“We are now billing ourselves as a destination vacation in your own backyard,” she said.

The shells of zebra mussels line the framework of a boat lift on the shore of Pelican Lake in Otter Tail County, Minnesota, in early July. Area residents say the presence of the mussels can be a nuisance, but they also say fears about potential impacts of the mussels on things like fishing have faded. David Samson / The Forum