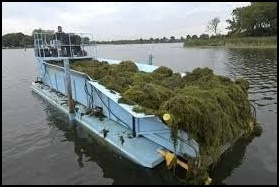 Business owners, residents call for swift changes in methodology, transparency when it comes to lake management

After months of fact-finding, Tonka Bay Marina owner Gabriel Jabbour and the Lake Minnetonka Association,  have concluded that current methods of harvesting invasive species such as Eurasian Watermilfoil do more harm than good to the lake.

“A complete overhaul of the harvesting program is needed,” said Jabbour. “All of the stakeholders need to sit down and work together for the future. If we don’t this could become an even worse problem.”

Through investigation and research done by Jabbour and the LMA, it has been discovered that while their intentions may be good, the mechanical harvesting done by The Lake Minnetonka Conservation District (LMCD) is potentially spreading invasive species like Flowering Rush, instead of controlling it.

“Research shows that flowering rush, starry stonewort, and other AIS can be spread by harvesters,” said Eric Evenson, Director of the LMA. “Lake Minnetonka is used by boaters from every corner of the state.  To prevent the spread of invasive species in the lake the current harvesting program needs revision and the operators need more training.”

While Jabbour and the LMA step up calling for immediate wholesale changes to the LMCD mechanical harvesting program, the DNR says they agree in part that all stakeholders need to work together to effectively manage AIS on Lake Minnetonka.

Keegan Lund, the DNR Invasive Species Specialist for the Lake Minnetonka area, has been working with lake residents for the past 7 years. “Lake Minnetonka is a valuable statewide resource and better coordination could help to effectively manage AIS. With so many stakeholders and interests on the lake, having one body or organization responsible for managing AIS would improve results”.  Lund added that Starry Stonewort, a newer invasive species has been identified in nearby Medicine Lake and if it were to spread to Lake Minnetonka there could be significant impacts.

Jabbour says the problem is the LMCD is ill equipped and incapable of running the Harvesting program with their existing staff.

“There seems to be an agenda for everything they do,” he said. “I have spent time and money to research their practices and what I am discovering is that they lack the capacity to be in charge of such an operation.”

Evenson and Jabbour both point to the example of LMCD board member Sue Shuff who has been a vocal opponent to any changes made to the harvesting program. After research, it was discovered her brother, is an employee of the LMCD paid to oversee this harvesting program.

“The LMCD is not receptive to outside help from its citizens,” said Jabbour. “For the sake of this lake we need to find better ways of protecting the lake but also find better ways to make sure everybody that lives on or uses the lake has a voice in how we protect it.”

Editor’s note: A news release involving Lake Minnetonka in the Twin Cities may seem far afield to publish in the Pelican Rapids Press–geographically far removed from the metro area. But this emailed news item caught our eye because of the importance of lakes to the greater Pelican area; and the issues surrounding aquatic invasive species (AIS) and the harvesting of invasive water vegetation. Minnetonka was infested early by some of the same invasive species that later arrived in Pelican area lakes–and experiences in suburban area lakes may provide insights for the fight against AIS in the Otter Tail County lakes area.