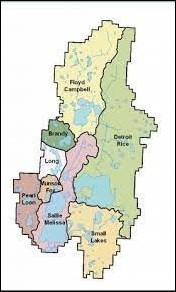 There are numerous organizations and agencies in Minnesota that focus on the preservation and protection of lakes.  There is often confusion about the roles each of them play and how they interact and collaborate together on statewide and local issues.   Watershed Districts and Soil & Water Conservation Districts (SWCD) are two types of organizations that overlap in some ways but also have unique makeups and characteristics.

A watershed is an area of land that drains all the streams and rainfall to a common outlet such as the outflow of a reservoir, mouth of a bay, or any point along a stream channel.

Watershed districts are local units of government that work to solve and prevent water-related problems. The boundaries of each district follow those of a natural watershed and consist of land in which all water flows to one outlet.  The districts are usually named after that watershed.

The Minnesota Association of Watershed District (MAWD) is a non-profit organization that represents local governments that focus on the management of water on watershed boundaries rather than political boundaries, such as cities and counties. Primary areas of focus include providing educational and training opportunities, lobbying and advocacy services and regular communications. MAWD represents 39 Watershed Districts and 4 Water Management Organizations in the state.

Soil and Water Conservation Districts (SWCDs) are also  special purpose units of government. SWCDs are charged with conserving the soil and water resource at a local level. SWCDs have elected Boards and do not have taxing authority. SWCDs work with landowners on a voluntary basis and do not have any land use authority (no permitting or regulations). However, sometimes a County Board will ask the SWCD to take on those roles. Roles normally include Feedlot, Wetland Protection, Buffer Laws and are very specific in nature. SWCDs cover the whole state, usually based on County boundaries except in just a few situations for larger counties. Otter Tail County is one of those situations where there are two SWCDs in the County; West Otter tail SWCD and East Otter Tail SWCD. Most of the work is done with private landowners who have requested some type of assistance. Provided is staff with expertise and in some cases there is funding available through grants to help cover the cost of projects. SWCDs work very closely with local, state, and federal agencies to help deliver private lands conservation programs at a local level. The East Otter Tail SWCD over the past few years has partnered with federal partners including the Natural Resources Conservation Service, US Fish & Wildlife Service and the US Forest Service. Our state agency partners include the Board of Soil and Water Resources (BWSR), MN Pollution Control Agency (MPCA), MN Dept of Agriculture, MN DNR, and the MN Dept of Health. In Otter Tail County SWCDs have a strong relationship with the County Board of Commissioners.

What Is A Watershed District?

What do Watershed Districts Do?